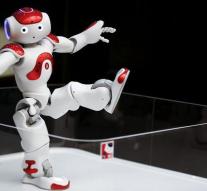 amsterdam - Robots would in future be given a status of 'electronic person, which owners would have to pay taxes possible. That is the recommendation in a draft resolution which the European Parliament has submitted to the European Commission.

According to the Luxembourg author of the proposal Mady Delvaux we are possible at the beginning of a new industrial revolution. Which will ensure that human workers in large numbers will be replaced by advanced robots, which are not only more convenient but also are getting smarter. The damage can be daarvanzou recovered in this way the owners of the devices dir their 'geweten'hebben.

For robotax should be registered all advanced robots to the authorities so that their owners can be excited for taxes or social security contributions. The proposal is reminiscent of the 'automation tax 'on computers that former Labour leader Joop den Uyl wanted to introduce in the eighties, because of all the jobs that would disappear with the introduction of computers. This proposal never made it and finally made computers rather more than fewer jobs.