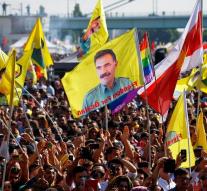 - "PKK leader Abdullah Ocalan after a long isolation may again receive visitors on the Turkish prison island of Imrali. According to the Turkish state news agency Anadolu got the brother of PKK leader permission to visit him, just before the Muslim Feast of Sacrifice, which starts next Monday."

"Last Monday were fifty Kurdish activists went on hunger strike to protest the isolation of Ocalan, including five MPs from the pro-Kurdish opposition party HDP."