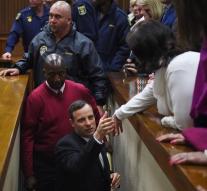 - Sports hero Oscar Pistorius Wednesday convicted for the murder of his girlfriend Reeva Steenkamp. That happened a few months after the highest court of Appeal of South Africa rejected a previous conviction for manslaughter. It is thus finally done with the super star status of the South African paralympiër.

In the summer of 2011, Pistorius wrote sports history when he became the first disabled athlete competed with the 'normal' athletes at the World Athletics Championships in South Korea. A year later reached the fame of the South African with two artificial legs made of carbon a highlight. 'Blade Runner' took part in the London Olympics. Shortly thereafter he was the crowd puller at the Paralympics, where he won his sixth gold medal in the 400 meters.

In February 2013, the sports hero was another world, but then because he had killed his girlfriend. In October 2014 considered a South African court him guilty of manslaughter, he was very much against the wishes of the public prosecutor imposed a mild punishment. The prosecution was successfully appealed. The highest court of appeal ruled that he should be punished for murder. He received six years in prison Wednesday for that.


Pistorius lost by a congenital defect as eleven month old baby his lower legs. He was to not totally blameless for the shooting incident of 2013. he was arrested for assault in September 2009. He was at his door with someone clashed. That same year he was followed by a boat accident in the hospital. Pistorius had something to reckless risks in the Vaal River and a pier rammed. Pistorius had, according to an ex-girlfriend always a gun.