Home / World / Pistorius hear whether he is guilty of murder 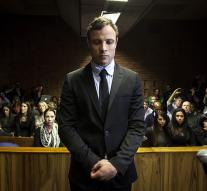 - The South African disabled sprinter Oscar Pistorius will hear Thursday whether he is guilty of killing his girlfriend Reeva Steenkamp. The highest Court of Appeal of South Africa does there ruling on.

If the judge decides that the former Paralympic athlete is guilty, he faces a sentence of at least fifteen years above the head. In 2014, Pistorius got the right five years for manslaughter.

He killed his girlfriend with four shots through the door of the bathroom. Pistorius known to have shot, but said he thought there was a burglar behind the door. He was acquitted of murder. Further, he received a suspended sentence for illegal possession of firearms.