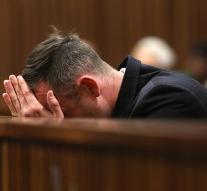 - Paralympic and Olympic athlete Oscar Pistorius will hear on July 6 the punishment he receives for the murder of his girlfriend Reeva Steenkamp. This was announced Wednesday after three days of hearing in court in South Africa Pretoria. The cases 'Blade Runner' hangs minimum of fifteen years imprisonment overhead.

Pistorius (29) shot in 2013 on Valentine's Day his girlfriend Reeva Steenkamp dead, through the closed door of their bathroom. The athlete has always maintained that he was unaware that Steenkamp was behind the door. He thought he had heard a burglar.

Initially Pistorius was convicted of death by negligence and sentenced to five years, but on appeal it was found guilty of murder.

'Father child was still trying to save alligator '