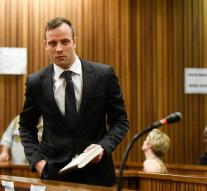 johannesburg - Oscar Pistorius on Monday filed a complaint with the Constitutional Court in South Africa against his murder conviction. The former paralympic athlete wants to prove that he is a victim of an unfair trial. As the conviction remains he can get a prison sentence of fifteen years. In recent months he was on house arrest with an uncle in Pretoria.

Pistorius (29) shot in February 2013 his girlfriend Reeva Steenkamp dead at home. In December 2015 was The Blade Runner, whose lower legs were amputated, convicted of murder. Initially, the court had sentenced him for manslaughter, but that decision was overturned by the Supreme Court.