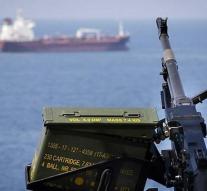 - Armed pirates have Wednesday off the coast of Guinea raiding the container ship Wendok. She hostage the crew and took off with cash and goods from containers.

The authorities of the West African country reported that no one was injured during the robbery. Under which flag the Wendok momentum and who the shipowner was not disclosed. Also, one would not lose what the charge is.

West African waters are among the most unsafe in the world. In particular the coast of Nigeria as particularly dangerous. The pirates are on both cargo and hostages, who then demanded ransom.