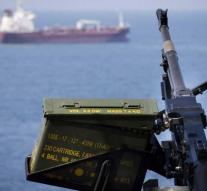 moscow - Pirates have kidnapped six Russian sailors off the coast of West Africa. That is what the Russian news agency TASS reports.

The attackers have taken six crewmembers and taken them away, writes the Russian embassy in the African Republic of Benin on Saturday on its website. There were 24 people on board the container ship MSC Mandy. The remaining crew members are safe and have since left the territorial waters of Benin and Nigeria. Most people on board are Russians. According to the embassy, ​​the incident took place on Wednesday in the Gulf of Guinea. The captain of the ship is under the hostages.