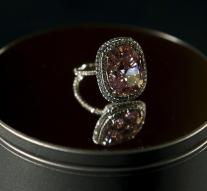 geneve - A pink diamond Tuesday night at an auction in Geneva raised a record amount equivalent to 26.6 million euros. Of the 16.08 carat stone was bought by an anonymous bidder remained, said auction house Christie's.

The gemstone was encased in a ring and cut in the known pillow shape, a rectangle with rounded corners. The proceeds of the jewel was half a million above the estimated value. The diamond was offered for sale by an American family.

Large colored diamonds are rare and are not frequently traded. Christie 's has auctioned the last 250 years only three pink stones greater than 10 carats.