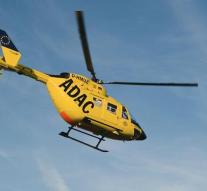 enschede - On leaving this weekend in Enschede the pilot of a traumaheli, who rushed to a hospital with a patient, was wearing a laser pen. The steering officer had to mute the landing lights to pursue the flight undisturbed.

Above the Wesselerbrink district, the pilot was shot with a laser. The airline east of the Netherlands warns alarms and warns that this is dangerous. Flyers can get blinded. In addition, so-called laser radiation can even cause permanent eye damage.

According to MST spokeswoman Lars Wormgoor, it is more common for the pilot of the traumaheli to be blown by laser-like perpetrators. In the case of Sunday evening, it did not lead to delays: 'The pilot solved this by turning off the landing lights, making him more difficult to follow by the perpetrators. '