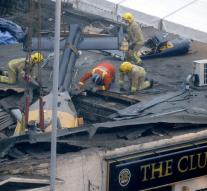 glasgow - The helicopter accident that resulted in Glasgow in November 2013 ten people died, was caused by the pilots ignored the fuel ran out. That investigation into the incident revealed, according to British media.

The helicopter crashed on the busy pub The Clutha in the center of the Scottish town. The researchers Aviation Organization AAIB found no evidence for technical failures or any fire that might occur in the unit.

Why the pilot did not respond to the sound signal is not clear. There will be a follow-up investigation in an attempt to recover it.