Home / World / Pickpocket has no future in Venezuela 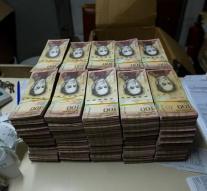 caracas - Inflation in Venezuela amounts to about 720 percent this year. Money is almost worthless. Retailers count mountain banknotes customers deposit on the counter not after, but weigh the stack of paper to determine the value.

Hundreds bolivar, the largest bill of the national currency, has a fair value of only a few cents. Purses and wallets have become useless utensils and virtually disappeared from the cityscape. Bergen notes are in handbags and even backpacks. Pickpockets have no reason to exist in socialist Venezuela.

The South American country got into trouble since started to drop the price of oil in 2014. Oil determines the country's exports up 95 percent. President Nicolás Maduro, had the money presses overtime, with hyperinflation as a result. There is money, but the counterpart is missing, writes The Independent.