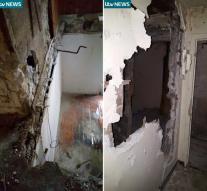 - The apartment where the French police on Tuesday raided in search of suspects in the attacks in Paris, little is left. The British ITV News published photos that still do most reminiscent of a war zone.

The apartment in Saint-Denis is full of bullet holes and whole sections of wall have disappeared by explosions. It is unknown when the photos were taken exactly.

In the raid in Saint-Denis came under more Abdelhamid Abaaoud killed, the leader of the group that committed the attacks in Paris.