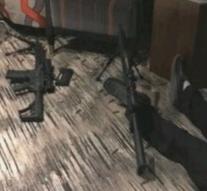 las vegas - UPDATE 10.28 PM- US media shared photos showing the hotel room of massacre Stephen Paddock (64). On one of the images the shooter can be seen. He lies on the ground between weapons. On the table it seems like a letter and a pen. Whether Paddock has left a message is not clear.

The Boston news channel 25 claims that it has received the pictures of police sources. At the attack- described as the largest ever in the United States- 59 were killed and more than 500 injured.

Other images show the guns on two chairs. The floor of the hotel room is similar to both pictures.