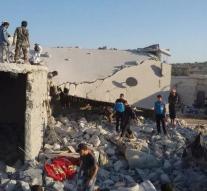 brussels - Images that circulated in recent days in Russian media of an alleged Belgian bombing in Syria, more than two years old. It is according to the Belgian newspaper De Standaard to take pictures of another air raid, which was conducted in 2014 by the Americans.

According to newspaper reports at times of inter alia Russia Today and Rossiya 24 always the same pictures back. The captions would thereby suggesting that it is topical material.

The issue led to tensions between the countries. Russia claims that civilians were killed by an attack of Belgian F-16s in Syria and called Friday the Belgian ambassador to the mat. The Belgian Government denies the allegations in all keys.

An employee of news channel Russia Today was facing Standard have admitted that it is indeed not about images of a Belgian air raid. ' But the most important is that they reflect well the international coalition which is able in Syria, '' he said.