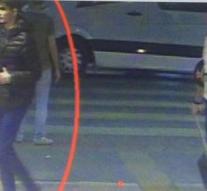 - There are images released of one of the perpetrators of the attacks of Istanbul on Tuesday. It shows how the perpetrator coolly walks into the airport.

The British media Daily Mail came up with so-called stills images from security cameras where one of the three bombers reasonably recognizable to see is. Interestingly, the man walking around in a so-called 'puffa jacket, a winter coat that bears the offender in midsummer.

The Turkish government assumes that it is IS-fighters, but that has not been confirmed by the terrorist organization.