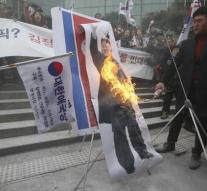 seoul - South Korean demonstrators have made clear their dissatisfaction with North Korean participation in the Winter Olympics. During a demonstration, according to state press agency Yonhap, they set the northern flag and a photo of dictator Kim Jong-un on fire.

The conservative activists took action at a train station in Seoul. A North Korean delegation arrived there, led by singer Hyon Song wool, reportedly Kim's ex-girlfriend. The North Koreans view locations where artists from their country can perform in the context of the Olympic Games.

The demonstrators complained that Kim actually hijacks the international sporting event in their country. ' The Winter Games in Pyeongchang change into Kim Jong-un's Olympic Games of Pyongyang '', it sounded. The South Korean police have extinguished the fired objects, Yonhap reports.