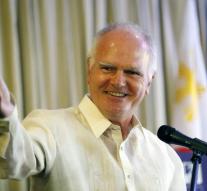 The Philippine Ministry of Foreign Affairs has not yet responded to Jessen's statements. The decision may be linked with expected financial support from China, which was promised after the summit on the so-called 'New Side Route'.

The EU financed programs in poor and troubled areas in the Philippines. According to Jessen, about 250 million euros of subsidies will expire when the financial support is stopped.

The relationship between Philippine President Rodrigo Duterte and the European Union has been under pressure for a long time. The EU is critical of Duterte's hard-working approach to drug dealers and users. Since its inception, thousands of suspects of drug offenses have been shot dead. According to the president, European countries do not see how big the drug problem is in his country.