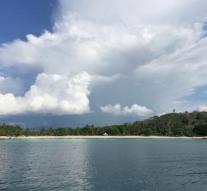 manila - More than 100,000 people have fled to the Philippines for Typhoon Nock-ten that Saturday reached the east of the country. The storm with wind speeds well above 200 kilometers per hour reached the city Bato ashore.

The authorities have a storm warning out for 38 counties. There are no reports of casualties.

Monday, the typhoon is expected to reach the capital Manila. The Philippines are affected annually by twenty whirlwinds. In November 2013, more than 6,000 people by storm Haiyan.