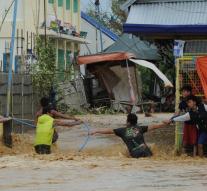 - The number of people in the Philippines has been killed by the typhoon Koppu has risen to nine . Authorities fear that this number will increase in the coming days , as many people are missing. Several remote towns and villages cut off by the natural disasters of Sunday from the outside world .

Koppu addition to deaths caused a considerable havoc. The island of Luzon is the hardest hit . Flooding, fallen trees and boulders on roads ensure that the counseling but tough gets going.

In many areas, the power is out. Monday the typhoon moves slowly toward the north and decreases in strength. Experts expect that the typhoon, in the course of the day, slowing down to a tropical storm.