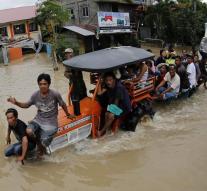 - The death toll from Typhoon Melor which hit the Philippines earlier this week, Friday is increased to 41. Four people are still missing, twenty people have been injured and 750,000 people have been evacuated. They are expected to spend Christmas homeless and without power.

Monday Melor came ashore on the island of Samar and made it the first victims. The storm has since changed, but has left a trail of destruction and devastation. The typhoon experienced at the peak wind speeds of 185 kilometers per hour.