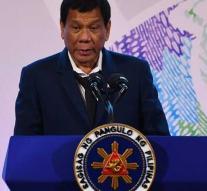 manila - The Philippines step out of the International Criminal Court (ICC) in The Hague. The country reacts to the investigation that the court announced to extrajudicial killings.

After Rodrigo Duterte came to power in 2016, he started a true witch hunt for everything related to drug trafficking and use. Thousands of people died because of police violence. Hundreds of drug dealers and users were shot dead by civilians.

President Duterte announced on Wednesday that he is withdrawing his country from the court. In a statement, Duterte says that he is leaving the Criminal Court because of the 'unfounded, unprecedented and excessive attacks on my person and on my government. '