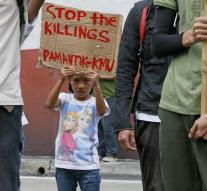 oslo - The Philippine government and the communist National Democratic Front have a cease-fire agreement indefinitely. The agreement will be signed in Oslo on Friday to 11.00. That the Norwegian Ministry of Foreign Affairs, which mediates between the parties informed.

The signing marks the formal resumption of peace talks between the rebels and the Philippine government, which still five years located. The peace process proceeds in fits and starts. Norway mediates since 2001.

The new Philippine president Rodrigo Duterte wants to quickly end the guerrilla wars in both communist and Muslim rebels, because they hinder the economic development of the country.