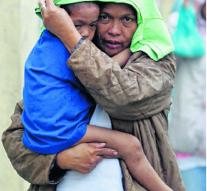 - The people of the Philippines for two years after the devastating typhoon Haiyan better prepared for disasters. So say the collaborating organizations behind the fundraising Giro555.

" Each year, rave average twenty typhoons on the Philippines. Therefore, with the help of continued attention to preparing people for disasters, for instance through contingency plans, good communication such as radio and the strengthening of dykes and dams ", according to the organizations in an account for the spending of the money raised.

The action for the affected Filipinos yielded 36 million euros, which is now 90 percent is given to assistance. Before the end of the year round out the organizations with the remaining money from the aid.

According to Simone Filippini of Giro 555 Much has been achieved since the disaster. " With the money from Giro555 include 206 641 people helped to shelter, 34 318 people have access to latrines, 27 790 families received financial support and 81 741 children back to school or recovered in new classes ", said Filipini.

Typhoon Haiyan raged on November 8, 2013 on the Philippines and affected 16 million people. It is one of the strongest storms ever measured. Over 6,000 people lost their lives, hundreds of thousands homeless.

On Sunday, November 8th, the victims of the disaster will be commemorated in the Church of our Saviour in The Hague.