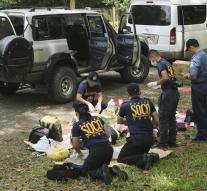 - Philippine police on Friday shot dead a mayor and nine of his bodyguards. The authorities accused Samsudin Dimaukom mayor of the town of Datu Saudi-Ampatuan on Mindanao island of involvement in drug trafficking.

The mayor and his bodyguards drove in two vehicles at a checkpoint. According to the police they did not stop. Agents then opened fire on the car with the mayor. ' We had information that the mayor and his men were carrying drugs. We tried to intercept. But she opted for a shoot, '' said a police chief. He said no officers were injured, but a police car was riddled with bullets.

Philippine President Rodrigo Duterte conducting a brutal war against drug trafficking in his country. Rights groups he let death squads have their way.