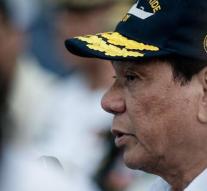 manila - The Philippine police are losing control of the bloody war against drugs that President Rodrigo Duterte conducts. He gives the anti-drug agency PDEA the lead on operations to reduce drug crime.

The president was arrested internationally and in his own country because of the police's cumbersome performance during drug-abuse operations. In addition, thousands of people came to life.

The police dismantled all eighteen regional anti-drugs units on Thursday. The spokesman for the president said that the PDEA goes behind 'the higher echelons of syndicates and their guardians in the government'.

Duterte made a speech on television out loud to Western critics of his policy. 'Perhaps this is what these stupid EU guests are pleased with. They were all focused on the number of dead, 'said the president.

It's not the first time Duterte puts the police on a sidewalk. He did that in January, but figured out five weeks later. The PDEA can not measure in manpower with the police, which has about 190,000 men.