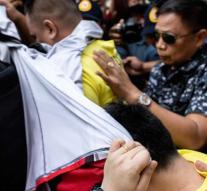 manila - Three police officers in the Philippines were sentenced by a court to prison sentences of up to 40 years for the murder of a 17-year-old student. The court found it proved that the agents intentionally killed the victim in an alley in the capital Manila.

' An attitude of 'First shoot and only then think' does not fit in a civilized country. Murder and manslaughter are not among the tasks of law enforcement officers. Public order is not served with loss of life, 'Judge Roldolfo Azucena said in his explanation of the verdict.