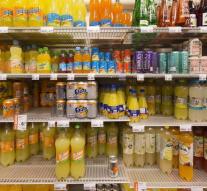 - Philadelphia on Thursday became the first major American city that is taxing sodas. The local law was passed to the applause and cheers by 13 votes to 4.

The tax represents a new blow to the soft drink industry, which suffers already among the growing concern among consumers about their health. The tax of a half cent will apply to beverages containing added sugar or artificial sweeteners have been added.

Motorist looking for a fight on A27


Since 2009, several places in the United States tried to introduce a similar tax. Philadelphia also tried it twice before, but to no avail. So far succeeded only in the California university town of Berkeley.

The bill in Philadelphia differed from previous attempts by Mayor Jim Kenney, the potential tax benefits of the soft drink tax emphasized rather than public health. This strategy can be decisive for the movement that seeks the input of a tax on sugar or sweetener drinks.