Home / World / 'Petry through as a one-man fraction' 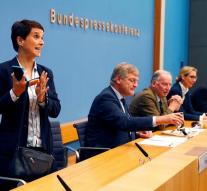 berlin - Frauke Petry continues as a one-man squad in the German Bundesdag. That she declared against Die Welt.

Earlier in the day Petry watched by announcing her departure from the Alternative für Deutschland group. She did that at a press conference of the party, leaving her former colleagues back.

In the party it has been a while. Petry thinks that the party had become too screaming opposition party, while rather being constructive, by operating 'Conservative Realpolitik in the right sense of the word.' Also, she had a long time struggle with the party's right-hand flank, while she herself was slightly more moderate.

The German Die Welt is already speculating about the future of Petry: she might be able to work on his own group in the future, and may want to join members in the AfD party. This way the party is already broken before it is actually installed.