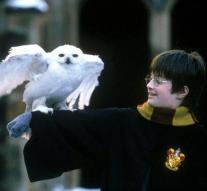 amsterdam - The animal rights organization PETA accuses use producers of movies and TV shows in the United States in animals strongly neglected. The finger of blame points to Gary Gero's Birds \u0026 Animals Unlimited (BAU), a company that supplied the animals for hundreds of productions.

BAU worked like animals supplier on films and series such as Harry Potter, Marley \u0026 amp; Me, Pirates of the Caribbean, Game of Thrones and Zoo. PETA (People for the Ethical Treatment of Animals) managed to place an employee at BAU in Hollywood who witnessed the abuses there, and the laws on film managed to capture.

There was mention, among others animals were kept in cages highly polluted by excrement, were too little food because they had to lose weight and veterinary care was denied. BAU had at one point even a month no veterinarian employed.

Film and TV producers have claimed PETA unaware of the abuses outside the set. The organization advocates for one thing: keep a production animal free. PETA works at multiple sites in the world and is headquartered in the US She claims to be the largest animal rights organization in the world.