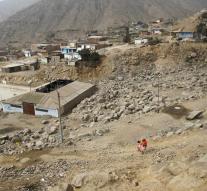 - Four out of five Peruvians has no bank account, but the 30 million inhabitants have jointly have approximately 32 million mobile phones. The major banks in the country to have jointly developed a system to allow the flow of funds through mobile phones expire.


The major financial institutions in the country have now Peru Digital Payments set up on December 15 launched its mobile payment program Bim.
'We want this program reaches people who have no bank account,' says Carolina Trivelli, who is in charge of Bim, to Bloomberg. 'That's the woman who lives in the countryside and has a mobile phone with nine keys, a 2G connection and a prepaid card. '
The Bim software works on phones with few features and consists of a simple menu with numbered options such as buying minutes or sending money.
There are about 255 different mobile payment spread over 89 countries. However, Peru is the only system in which all the country's banks are connected. Starting next February, all customers of the three major telecom operators in Peru have access to Bim and they can do themselves transactions.
NEW