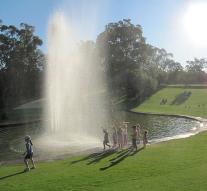 perth - Perth consumes so much groundwater that Australian city descends annually than 6 millimeters. The western city on the Indian Ocean consumes literally the ground beneath his feet. That's in the American scientific magazine Journal of Geophysical Research.

Researchers at Curtin University in the city suggest that the growing need for water may even be responsible for rapidly rising level of sea water off the coast. From the moment the waterworks Perth water pumped from the aquifers under the city, the subsidence of the soil began. The weight of the city of the press literally sucked dry soil in each other.

The pace at which the level of the ocean rises, in Perth three times higher than the world average is the case. The Australian climate service takes into account that could be by the end of this century, the sea level around the continent increased from 40 to 100 centimeters.