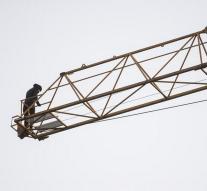 utrecht - A person, according to a man by road, climbed on Monday at a crane at the Willem Arntsz House in Utrecht. On-site helpers try to talk down the person who may be confused.

When the person suddenly got up, the bystanders became cheeky Spanish. 'Now he's back', reports an eyewitness.