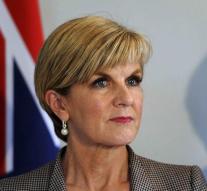 sydney - The Australian Foreign Minister, Julie Bishop, thinks that the names of those responsible for the downing of flight MH17 will be known by the end of year. 'By the end of the year, perhaps early next year the list of those we will be accountable secured and there should be prosecutions take place.'

That said Bishop Sunday against the Australian ABC.

The international research team made JIT Wednesday announced that the airliner was downed by a Russian-manufactured rocket was fired from pro-Russian rebel region in Ukraine. These findings contradict statements by the Russian government that the plane probably shot down by soldiers from Ukraine. All 298 occupants of the aircraft, including 196 Dutch and 28 Australians were killed in the plane crash on July 17, 2014.

As far as the Australian Minister, there will be an international tribunal where the perpetrators are held accountable. This is what happened after the attack in 1988 on a PanAm plane above the Scottish city of Lockerbie.