Home / World / ' Perpetrators in Bataclan were young and controlled ' 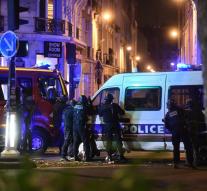 - The bombers in the musical Bataclan in Paris were very young and performed very measured steps. The radio journalist Julien Pearce of the radio station Europe 1 said Saturday. He was in the hall during the performance of the American rock band Eagles of Death Metal when the attack took place.

" The men had guns like Kalashnikov rifles and shot wildly. That lasted 10 to 15 minutes. It was extreme violence. There was panic. They ran toward the scene. The perpetrators had time to reload their weapons at least three times ", said Pearce.

" It was two or three masked men in the middle of the concert came running inside. They started shooting directly at the entry ", said another witness. " They shot them into the crowd and cried " Allah is great." "

Another witness reported that from the balcony in the theater down in the crowd shots were fired.

In the hall, which can accommodate 1,500 visitors, according to preliminary figures killed 87 young people.