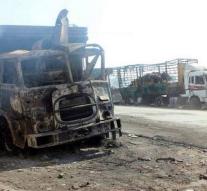 new york - The United Nations has been unable to who is responsible figure for the air raid on an aid convoy of the International Red Cross on September 19 in Syria. According to a study which was set up by Secretary-General Ban Ki-moon. The report states that there was an air raid, but that can not be proved that the attack was deliberate.

'The inquiry concludes that although there was an air raid, it is not possible to identify the perpetrator or perpetrators. 'The committee does say that only Syria, Russia and the United States have access to aircraft to carry out such an attack, not the opposition. It is the researchers 'highly unlikely' that was occupied by the US-led coalition in the attack.

The US being the finger at Russia, but Moscow has always denied any involvement.