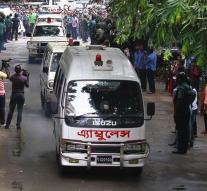 dhaka - The seven perpetrators of the hostage-taking in Dhaka, making sure killed 22 people, all citizens of Bangladesh. CNN reported on the basis of information from the police.

The police said that among the perpetrators five militants that they had tried to arrest earlier. Thus it did not work, is not clear. Of the seven terrorists were six killed. One was arrested Saturday when commandos ended the hostage.