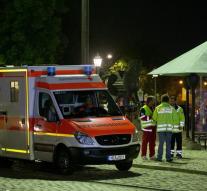 - The perpetrators of the attacks in the German towns of Ansbach and Würzburg had contact with members of IS. Their phone records show they exchanged messages with IS-members.

Writes the German weekly Der Spiegel. IS members from Saudi Arabia helped the 17-year-old boy, in Wurzburg train passengers attacked with a knife and an ax, in coming up with the attack. The IS members asked the first boy if he would ride into a crowd with a car, but when it appeared that he had no license has been suggested to attack people in a train.

Shortly before the attack, the boy sent a message that read: 'See you in paradise. 'After five train passengers with a knife wounded, he was shot dead by police. In a video that appeared later on the net the boy swore allegiance to IS.


The 27-year-old Syrian who blew himself up also had contact with IS members at a festival in Ansbach. clear from the call history on his phone that it was actually intended to place the bomb between festivalgoers and to bring from a distance detonated. When he was stopped at the entrance of the festival, he brought the bomb there exploded. Fifteen people were injured here.

The bomber was an IS-trailer and was also a member of Al Qaeda. From the conversations he had with the IS members that he wanted to commit more attacks in Germany.