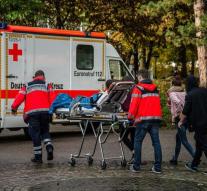 - The incident with gas Monday at a school in the German town of Heilbronn show the work of a thirteen year old student. She got Monday night with her mother to the police there to confess that she had sprayed pepper spray in the hallway of the school, according to German media Tuesday.

By that action came 41 students with respiratory problems and eye irritations in the hospital. The reason the girl stated that she wanted to try the pepper spray 'simple try. 'They had it with him because she was afraid of an attack from a horror clown.

At the time of the incident were 350 schoolchildren in the building. That was evacuated immediately.