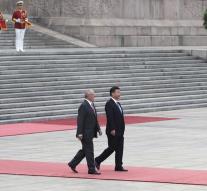 - "China's parliament, the National People's Congress, has dozens of members deprived of their seats because they were acquired by fraud. Almost half of the deputies of Liaoning Province to leave the People's Congress, reported state news agency Xinhua."

"The parliamentarians bought according to Xinhua people or granted other favors in exchange for a seat in the People's Congress. Or should they fear prosecution or what their future hangs above the head is unclear."

"In 2013, occurred already off again more than five hundred parliamentarians because they had been discredited for corruption."