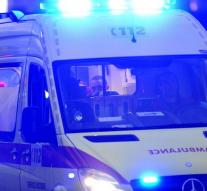 wontergem - Twenty passengers became ill Sunday night around 20:00 in a train drove inland from the Belgian coastal town of Blankenberge. It reports the Belgian press agency Belga. The train sat with about 2,000 passengers so full that people were unwell. Then pulled a traveler on the emergency brake.

Emergency services arrived to the train to help people and to provide water. Many passengers left the stuffy train. Around the train were hundreds of people. The train was full as earlier trains were dropped after an accident. Some five hundred people refused to continue by train. 22. Around 00 o'clock the train started moving again.