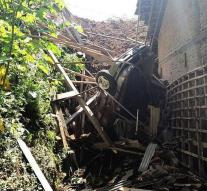 jakarta - Least 27 people missing since a landslide struck a village on the Indonesian island of Java. Dozens of houses were buried, said a spokesman for the emergency service. The landslide occurred at the village Banaran in East Java.

Authorities evacuated the village Friday (local time) because of the heavy rains. Villagers, however, would one day later returned to reap a harvest. Also they would be buried, but it is still unclear exactly how many people are under the mud and debris.

Policemen and soldiers are helping the villagers in the search for victims. The rescue work is hampered by the spokesman as people flock to the crash site to take a look. This causes traffic congestion in the area.