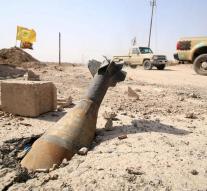 - The Pentagon spokesman Peter Cook announced Friday that its slain by air attacks in and around Mosul two leaders of Islamic State. It is among others to Basim Muhammad Ahmad Sultan al-Bajari, the Minister of Defence of the terrorist organization.

Al-Bajari oversaw the jihadis who conquered the city in northern Syria in 2014. The other was a military commander of IS in Mosul.

The fighter aircraft of the coalition that IS combats under US supervision in the region, peppered the goals that the two stayed in earlier this week.