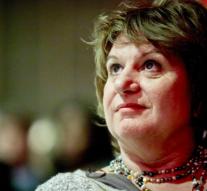 - The Economic and Social Council but can not make decisions about which direction it should with the pension system. Therefore remains unclear which side it should in future pension system, while next year reductions for hundreds of thousands of pensioners threaten.

After the summer is again launched a broad debate which should ultimately result in a recommendation to politics. That said SER President Mariette Hamer Wednesday in the House where the SER gave an explanation in response to a report on the future of pensions. SER, containing besides Crown Members also employers and trade unions, did a study of variants which are working within pension funds with individual Money box. But a distinct choice is there- to the frustration of the parties in parliament- not yet.

'We are not asked to make a choice,' Hammer defended himself. 'It's not the politics or the polder. Let's not make game of who is in charge. The direction we have with each other ', said Hamer. According to her, 'we run a relay race with each other.' In the fall she will come up with a broad-based advice to politics. Meanwhile breeds Klijnsma Secretary (Social Affairs) on building blocks for a new pension system. That letter must appear still comes for the summer recess.


Reason that the SER still dare to make a clear choice, 'seem'm sitting in the fact that employers and trade unions are deeply divided over how the system should be rebuilt. A real decision on the future of pensions can not be put on the table formation of the next government. But parties like the CDA and the PvdA, it is crucial that the polder supports the plans.