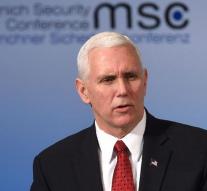 munich - The United States is and will remain inextricably linked with NATO. Even if the Americans seek a way for good relations with Russia, they are not blind to the threat of the Russian superpower.

The US vice president Mike Pence spoke this message Saturday from the Munich Security Conference. With his statements, he joined in the footsteps of US Secretary of Defense James Mattis, the NATO allies on Friday spoke soothingly. The US will not turn away from the alliance. However, the EU Member States will have to dig deeper into their pockets.

The United States will hold Russia accountable for his actions, Pence insured during his first major foreign speech. To begin the Russians have to respect the peace agreements of Minsk and thus prevent resurgence of violence in eastern Ukraine, he said.