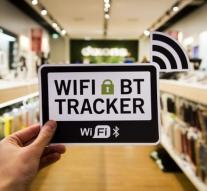 amsterdam - The Personal Authority has imposed a penalty on the Wi-tracking company Blue Trace. This company helps record stores customer behavior with the Wi-Fi signals from eg their smartphones. According to the privacy watchdog Bluetrace abides not follow the rules.

So Bluetrace collected more data than necessary, data were collected from local residents and passers-by and the data were not deleted or anonymised quickly enough. Bluetrace also informed visitors about stores not enough that they were followed.

Bluetrace given six months to comply with the rules. Thereafter weekly fined 5,000 euros to a maximum of 100000.

' With this information about people's behavior can be mapped and that's not allowed, 'said a spokeswoman for the privacy watchdog.' 'It is a fundamental right to move around freely without the movements end up in all kinds of files. People experience this as very intrusive. '

Bluetrace, which is active in several national chains and claims to be the leading provider of Wi-Fi tracking is has taken action in the Netherlands, according to its regulator still does not follow the rules. Thus, the information still lack and are still stored data from people who live near shops trackers.

According to the company fulfills it already 'fully meet the requirements to be protecting the privacy of consumers. 'There was even ahead run on European rules that are also in the Netherlands in force for two years.