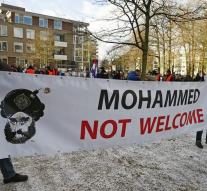 dresden - The origin of German anti-Islamization movement Pegida wants to organize a Europe-wide demonstration in February. Pegida-frontwoman Tatjana Festerling told the German newspaper Welt am Sonntag that the motion on February 6 will demonstrate at international level, including in Amsterdam.


There are further actions planned in cities including Warsaw, Tallinn, Prague, Bratislava and Birmingham. The main procession should take place in Dresden, the home town of the movement.,, We will greet each other via a live connection, '' Festerling said that. The organization is Saturday met in Prague to put everything on rope.
The move is expected that there will be demonstrated in other cities against Islamization. Pegida claims to have supporters in almost all of Europe.
NEW