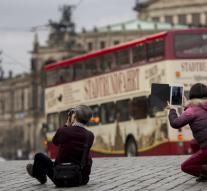 dresden - While almost all German cities pluses letter regarding the number of tourists, keep the hotel bookings in Dresden, the pearl on the Elbe behind. For the first time in years the number of visitors walk back and stand 20,000 jobs in the tourism industry at risk, reports the German newspaper Die Welt on Friday.

The deterioration of tourism is mainly traced back to one thing : the anti-Islamic movement Pegida says Bettina Bunge of Dresden Marketing GmbH. Dresden from the image damage causes by the public display of xenophobia sure tourists and business people stay away. They are thereby mainly domestic tourists to cancel.

Jens- Marten Schwass Hotel Taschenbergpalais Kempinski sees the same direct connection. " Dresden's image is now catastrophic. " On Mondays, the grand hotel, which is situated right next to the major sights of the city, 50 percent fewer bookings than last year. On those days is Pegida namely on the sidewalk.