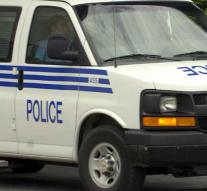 toronto - According to the Toronto police, a white bus has hit several pedestrians. Then the driver would have taken off in his car.

Some eight to ten people would have been hit by the bus, but ambulance staff report to CBC that it is five injured.

The bus would suddenly have driven on the sidewalk and hit the people there.