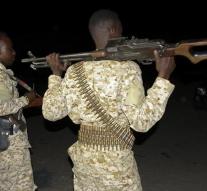 kampala - By attacking the terrorist militia al-Shabaab on peacekeepers of the African Union (AU) in Somalia, twelve Ugandan soldiers have been killed. Seven soldiers were also injured, the Ugandan Ministry of Defense said Monday.

Ugandan soldiers patrol with the Somali forces about 140 kilometers southwest of the capital Mogadishu. In the area, extremists of al-Shabaab have been fighting for power in Somalia for years. They want to introduce a kind of Islamic state of health in the Horn of Africa, repeatedly attacking military, police and civilians.

The 22,000-man-strong force of the AU supports the Somali forces in the battle against the group.